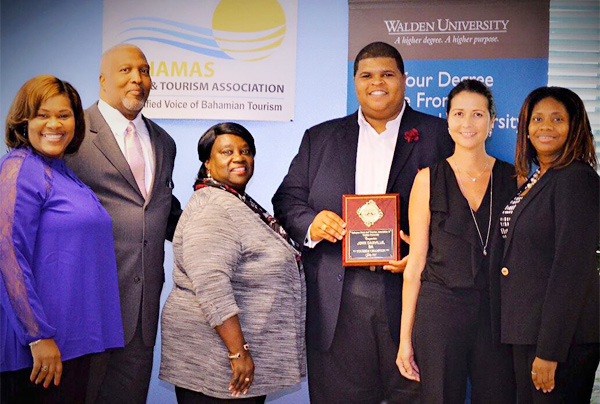 John began his career working at Atlantis, Paradise Island and credited the resort for providing him with a solid foundation for his success as a Public Officer; and his formidable array of ensuing achievements.

Since joining the Service on November 1, 2006, Darville has served as National Youth Ambassador to the Caribbean Community, Acting Youth Representative to the Organization of American States, Dean of the CARICOM Youth Ambassadors Corps, Executive Director of Junior Achievement Bahamas, Project Coordinator for the American Red Cross Caribbean HIV and AIDS Project in Association with the Bahamas Red Cross.

His current portfolio has him responsible for Youth in Governance Programs and Coordinator of the International Desk on youth Matters.  John is The Officer of the Year in the Ministry of Youth, Sports and Culture and was awarded National Public Service Officer of the Year in February 2017. Mr. Darville is also a licensed Minister at Pilgrim Baptist Temple where he serves as Minister of Music and a vocal artist and musician.

“This accomplished young man is proof that we all have the capacity to positively influence the largest contributor to our economy; regardless of where or how we are employed. Each one of us has the power to impact our own environment; through our work ethic, the way we treat our colleagues; ourselves and our visitors. This philosophy of consistently deploying diligence; and respect in whatever we do, will inevitably translate to our being able to proudly, consistently represent ourselves as a premier, authentic, uniquely Bahamian destination of choice”

The Bahamas Hotel and Tourism Association (BHTA) have partnered with Walden University; global leaders in student-centered online education, to recognize individuals who deploy the highest level of service and performance in their varying capacities of employment.

Tourism Champions are honored at a luncheon hosted by Walden University, where fellow employees, peers and management gather to congratulate their respective Tourism Champion.

Each Champion is awarded a $ 2500.00 Walden University scholarship; and employees of BHTA Member organizations are offered a 25% discount on Walden University online courses. Special thank you to Garden of Eden Plant & Nursery and Jay Jennings Party Rentals for donating décor; tables, seating and foliage for the luncheon event.